A blatant, carefree affair leads to some odd visions and strange happenings in an ancient cottage in the sticks.

A collection of short stories concerning ghosts. Some are traditional ghost stories in the tradition of M.R. James and Edgar Allan Poe. Other are not. Some scare, some are fun. Some play with the concept of a ghost. There are ghosts who are out for revenge and the living avenging the spirits that curse them.

Ideal for sitting around a campfire and late at night under the covers. Or maybe not if the stories themselves are any guide.

Check it out at Amazon. 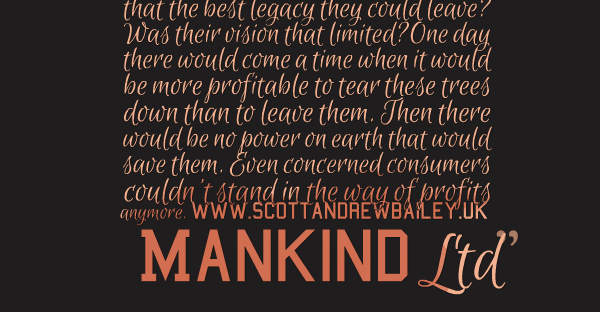 Would all the earth succumb to the concrete blanket of mankind? Was that the best legacy they could leave? Was their vision that limited?

One day there would come a time when it would be more profitable to tear these trees down than to leave them. Then there would be no power on earth that would save them. Even concerned consumers couldn’t stand in the way of profits anymore.

“Have we reached full coverage?”

“Not quite yet but we will very soon, the momentum has built and it will hit critical mass in a few days. It needs no further intervention on my part.”

“We have all the channels covered?”

“Everything! From the popular to the obscure. From hard copy books to online articles. From political diatribes to Twitter. From old newspapers to blogs and click-bait articles.”

“We have everything – we have erotica, geological patterns in the earth’s crust, astronomy, astrology. We have Game of Thrones and Star Trek. We have novels from established authors and fan fiction. Hell, we have fanfiction erotica stories about the Star Wars characters crash landing in Narnia! There’s no angle we haven’t covered.

“And the subliminal messages?”

“So subtle not one has been detected.”

“They are taking effect?”

“They have done their job. The population is yours to command – or will be in a few more days. I would say probably enough to make no difference already.”

“Good. And no one else knows?”

His boss smiled. A warm smile – full of sunshine and hope that he rarely graced on anyone. It made him feel pride in a job well done.

“Good,” his boss repeated, “now, just step through this door.”