Well, as soon as I saw this week’s picture I thought great! I have THE perfect poem for that – it fits so well. However, I can’t use it as I already have! For another of Sue’s writephoto challenges not so long ago – this one if you are interested.

So I knew I had to write something original. It was difficult to get that poem out of my mind until I hit on another idea – I would write a continuation of the story I did last week. See it here.

So here Sue’s photo for this week. 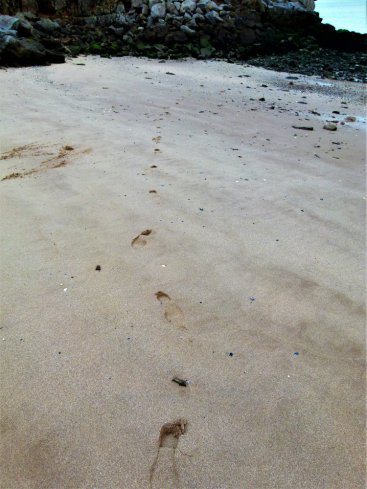 and here is part two of the story.

The fear she had been holding back pounded in her chest. Her heart thudded, her breath constricted.

All this time alone, she had been ignoring it, holding it at bay. It had not been difficult. The trials of survival had occupied her. That had been hard enough. Any weakness, any giving into fear, could trip her up. And it might be her final step.

It had been four moons since the storm, the sudden tumult that raised the sea against them, taken every one of the clan.

Everyone she had ever known.

Since then she had walked this land alone, swinging between throwing herself into the sea after her family, and desperately fighting for survival without really knowing why.

Since the storm the weather had been warm and calm, which was good as she had not made any effort to create or find shelter. All she had done was wander and find food.

She was no hunter, but she knew how to forage. She knew where to find fruits and roots that were good to eat. How to find fresh water.

Which was why she had hung by the beach. Though the sea now held an ill-boding threat to her, dark memories threatening to overwhelm her, it was also her only provider.

Her clan had always lived by the coast, travelled along it, living off the plenty of the great water.

Habit, as much as necessity, guided her path now.

Footsteps rocked her daze. Shook her out of the fugue she had lived in since the tempest had departed.

They stretched away from her in the sand. They must be fresh, the tide would wash them away.

They led off inland, she followed them with her gaze.

In the distance, far inland, across rolling hills, there rose a dark cliff. In the face of that cliff was a cave.

Scott Bailey is an author and blogger. His works include the dystopian novel “Mankind Limited”, "Thirteen Tales" – a collection of Ghost Stories and “A Spring of Dreams” collection of poetry, plus his latest work, a collection of epic poems - Andervayne's Dream. His blogging ranges across family articles, poetry and short stories and even the odd book or movie review. View all posts by Scott Andrew Bailey