Another bit of short fiction – another continuation of previous entries that I have decided to collate in one place – here. 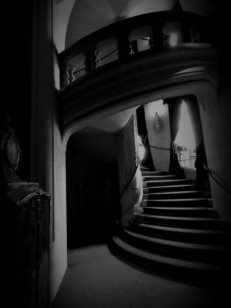 Ilaria regarded the stairs with apprehension. Should she ascend them? There was something about all this? Something she could not explain rationally and that disturbed her. She was a scientist! Her life was all about explanations.

Actually, she was not being honest with herself. She was an archeologists and in that field explanations were not always forthcoming. In fact she prided herself for her tendency to refrain from explanations. To her facts were what she found. A pile of swords in a pool was just that – a pile of swords in a pool. They might be in a broken state or not. What she did not do – what she insisted on – was starting down a flight of fancy trying to imagine – or theorise on what it all meant. Was it ritual? Or a treasure hoard? In the end there was no way of knowing. So it was best left at that – an unknown.

So why did this whole mystery upset her equilibrium?

It was that face in the caves. That ancient figure from a time so long ago it was a miracle that it still survived.

It was the contradictions in the figure. When they had discovered it she had enthused to her colleagues about the clarity and detail of the painting – and it was all true. The figures truly surpassed anything else she had seen that was contemporary or even later. Yet, by modern standards it was crude.

That figure of the man. It seemed to stare right through you. Look down through the ages and into your soul. Despite the fact it had no eyes.

And now this sword. She had seen the photo’s and there was no doubt in her mind – the figure was the same.

So she had pleaded and begged this visit – to see it for real. The owner had been reluctant – to say the least. He had even denied its existence.

It had taken a photo of the cave painting in return to convince him.

And still, she hesitated.

Her guide, looking for all the world like an old time butler, waited by the stairway. She had come all this way to Paris, to this opulent mansion, to this private collection.

She took a deep breath and nodded. The guide led her up the sweeping curve of the stairs.

They walked down a hallway, lined with many fine pictures which she she guessed were worth a small fortune each. They came to a heavy, modern security door. The guide discreetly entered a code and, she thought she detected, used a fingerprint to unlock the door.

They stepped into a small, dimly lit room. In the centre was a hexagonal glass case. Hanging in the case was the sword.

It did not look ancient. It did show signs of use but could have been twenty or so years old. The hilt certainly looked like it had been replaced.

But the rest – it drew her in. The deep rose gold of the metal had a deep lustre, as though light was lost in it, swallowed to another place deep within the blade where it ebbed, reaching out for reprieve.

And, there, on the blade, was the figure, the eyeless man.

She shook herself, immediately started to see the signs that told her the design, the origin of the the blade. It certainly, at first glance, looked to be something designed in the early iron age. Yet it also looked far too unscathed.

Was this a replica?

She asked the guide.

“No,” he said. “This is the real blade. I understand your confusion – but let me assure you – it has been aged correctly.”

“Was it found near here?” she ventured – it was a test. The was not Gaulish if she was correct.

“No,” he replied. “We have traced its earliest findings to Wales.”

She nodded, that chimed true to her.

“Is that why your master is so cloak and dagger? Does he think the Welsh agitators might want it back? As a symbol?”

The man paused for a long time. Finally he spoke again, carefully.

“No. No doubt you’re right, they would demand it back. This sword is not unknown though few know that it really exists. Many historians in fact equate to a more well known sword of Welsh origin. They are mistaken – that name does not belong to this blade – it has another.”

She looked at him quizzically

Before she could ask how he knew that he seemed suddenly to remember something. He went to the case and flicked a switch on the base. The sword began to rotate slowly. She watched, mesmerized as the light glinte on the strange red metal. Then she gasped as the other side of the blade came into view.

There was the figure of the woman, the same woman from the caves.

What the hell connected this sword to that cave – the time distance was fantastic!

“Well? You are the only person alive to have seen both this sword and the cave paintings. Do they indeed match?”

She nodded slowly. They did. She was so shocked by what she had discovered here that it took a few moments to realise that it had not been her guide who had spoken. It had been a much deeper and richer voice.

There stood an imposing figure. A middle aged man, well built and with strong shoulders over which he wore a coat like a cloak. A bristling, greying beard on a broad strong face. He leant his heavy frame on a sturdy black cane.

And though he has deep grey eyes it was immediately obvious.

Scott Bailey is an author and blogger. His works include the dystopian novel “Mankind Limited”, "Thirteen Tales" – a collection of Ghost Stories and “A Spring of Dreams” collection of poetry, plus his latest work, a collection of epic poems - Andervayne's Dream. His blogging ranges across family articles, poetry and short stories and even the odd book or movie review. View all posts by Scott Andrew Bailey