She stared at the artefact. It reminded her of a flower. Well, reminded was the wrong word. She had never seen a flower – there were no more left. They had died out long before she had arrived.

But in the last few months, her colleagues had managed to decipher and read the ancient data they had found here and there. They had pieced together a rough history of this dead place. Not much but enough – enough to know what happened.

Enough to know it could happen to them.

Before they had died – somebody had carved a final message on this artefact.

She wondered at that. She could not fathom its reasoning.

It was beyond doubt now that this giant metal flower had been the instrument that had called out to them so long ago. Sent its message to the stars.

And they had heard. 20,000 long years ago she and her colleagues had boarded their ship and started on their way.

In all probability, the flower was still broadcasting then. The carver of that message was still breathing good air.

Was puzzled her more was the fact that the remaining histories made it plain that it was foreseeable. Preventable even.

Yet she could also see that their own masters back home could easily make the same mistake. As advanced as they were the path was familiar.

So it was that she and her fellow robotic explorers had taken the decision to delay their trip home. It would take them 20,000 more years to get back with the warning.

This – folly – could send the message quicker. So here they were trying to repair it get it working again.

A desperate battle to avoid the fate of these long dead people who called themselves human beings. 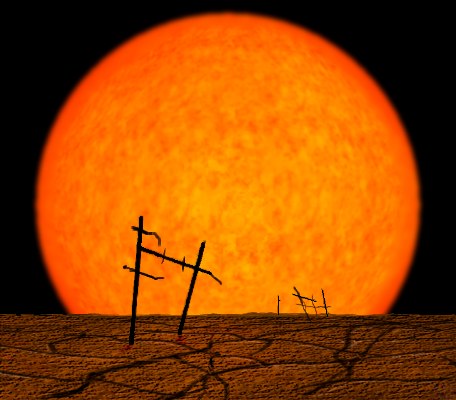 In response to the daily prompt Warning

Scott Bailey is an author and blogger. His works include the dystopian novel “Mankind Limited”, "Thirteen Tales" – a collection of Ghost Stories and “A Spring of Dreams” collection of poetry, plus his latest work, a collection of epic poems - Andervayne's Dream. His blogging ranges across family articles, poetry and short stories and even the odd book or movie review. View All Posts